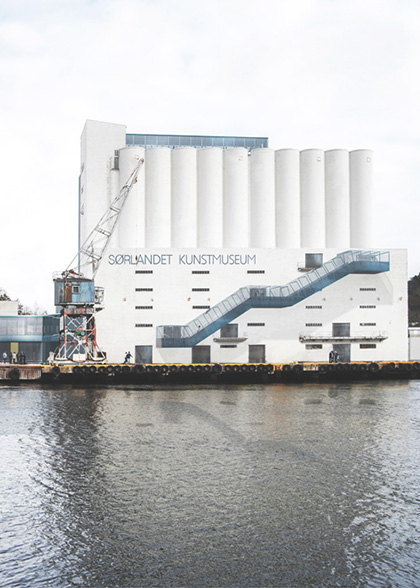 A series of experiences and atmospheres from the closest to the farthest scale, from the urban to the landscape, from the haptic to the visual, from the industrial to the artistic, from the heroic to the ordinary.

The assumptions on which the classical museums of the 19th and 20th century were based have undergone radical transformations during the last years. Reproductions, art books, films, and specially internet, have made it possible to study both the visual details and the historical association of works of art on seclusion and at any desired time. But obviously, as it happens with music, there is an inevitable difference between the high fidelity reproduction and the concert performance.
The new joint Art Museum for the Tangen Collection and Sørlandets Kunstmuseum that will inhabit the heritage silo at Odderøya provides a fantastic opportunity to experience a symbiotic interaction between function and anatomy that can envelop their viewers in an atmospheric and captivating exhibition.

The restoration proposal is intended to enhance the inherent morphological qualities of the silo making no attempt to conceal its undisguised nudity and emphasizing their expressiveness. Following the internal logic of the building, the sealed cylindrical cells which safeguarded the precious grain will now be in charge of guarding the works of art.

Beyond the white walls, the classical “White Cube”, which responds to a specific time and will, the raw perforated concrete structure can allow logical, chronological, narrative, dialectical setting, or the individualization of works and, ultimately, provide sense to what you see in any curatorial approach.

According to its functionalist and industrial character, the transformation design is conceived as a mere reorganization where the spaces that stored and efficiently handled the grain before, will allow now to accommodate art and the flow of people. The concept of conveyor belt which originally moved the grain connecting the silo with boats and trains for its distribution, is entailed now in a series of linked spaces to again meet the needs of connection and circulation, creating also a symbolic space as the threshold for the new institution. Built with materials that evoke its industrial past and materializing the reflection of the enclave on its façades, becomes the distinctive element of the revitalization of this historic building and its port environment.
This new structure arises as a great urban foyer that becomes the device able to organize all access: from the promenade seawards, from Kvadraturen or from the future Kanalbyen district. An added element, reflecting the present time, that despite sharing the industrial character of the silo, contrasts with the monumentality of its rotunda and assertive architecture, vestige of an era of certainty and pure volumes, revealing its contemporaneity with a lightweight construction, ever-changing , sinous, which grows and slides to adapt to their circumstances. An architecture built with layers of fabric: glass, wood, steel as lattices are to do with privacy and protection, of capabilities of mutation, an architecture based on layers of meaning, which seeks to redefine itself as a layer of inhabitation to join the new character of Odderøya as an important area for art and culture.
A series of experiences and atmospheres from the closest to the farthest scale, from the urban to the landscape, from the haptic to the visual, from the industrial to the artistic, from the heroic to the ordinary. 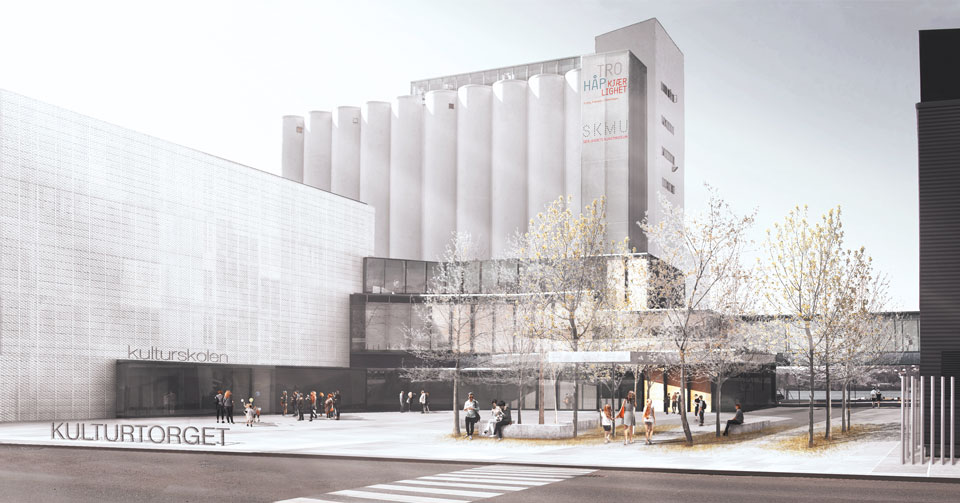