The societal and youth functions intended for this building are an opportunity to delve deeper into the complexity of human relationships, particularly those between young people and their societal surroundings, and to explore the demands that new types of social relations make upon architecture and the city – not only when planning new buildings but also when re-inventing city centres and re-using listed buildings.

Seen from a distance, Preston Bus Station, with its nine levels of car parking, is a landmark building in itself but its urban strengths lie in the human scale of its double-height concourse. The station’s extension into the new public realm and the design for the new Youth Zone linked to this listed building must provide a solution for this complex hub of social and urban relations – with the human scale of the ground floor being the starting point.
The taut curtain walling that delimits the ground floor of the station would be shifted in or out to accommodate the new Youth Zone. Façades would be ruptured to maximise the length of the Youth Zone perimeter in contact with the city and its young people, in an attempt to create a new social and cultural centre, more open and integrated into the built environment.

Our Youth Zone concept is not merely a building but a ‘new kind of street’ whose entrances, exits, steps, etc., are part of the city; a series of built places – meeting corners, quadrangles for group activities, passageways, alleys, etc – located inside and outside the original building.
Like the concourse of the existing station, this inner street would be the spine of the centre in the sense of a wide, continuous recreation area ideal for informal activities or an attractive area in which to simply socialise with friends. Whilst moving round this continuous recreation area, which is wide open to both the street and the station and looks back into the city, visitors to the centre and pedestrians in general will be able to see the activities going on in different areas: adding interest to the surrounding urban setting.

The simplicity of the station’s architectonic elements, its ‘giant order’ and central spine with ancillary spaces, are in response to the specific needs it was built for: passenger circulation, width of bus bays, parking facilities, etc.
Our proposal for the new Youth Zone is based on the Alison and Peter Smithson’s perspective of ‘picking up, turning over and putting with’: the giant order featuring in situ exposed aggregate concrete columns would be extended to inhabit the plaza, the curtain walling would fold in and out to create places of greater spatial interest, and the discontinuous central spine along the inner street would dictate how the new centre is used. These elements would be responsible for the long life expectancy and durability of the new centre, just as they have been – and still are – for Preston Bus Station. 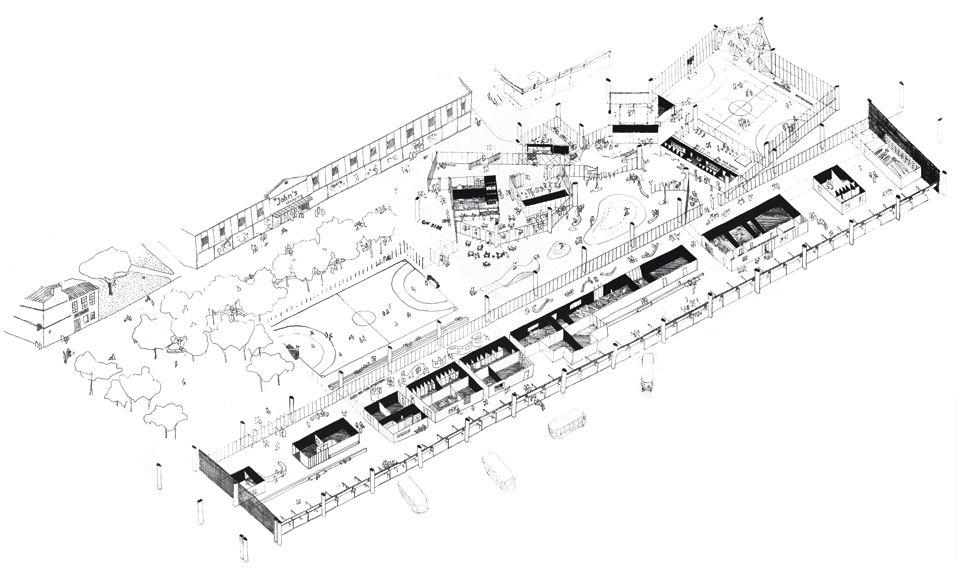